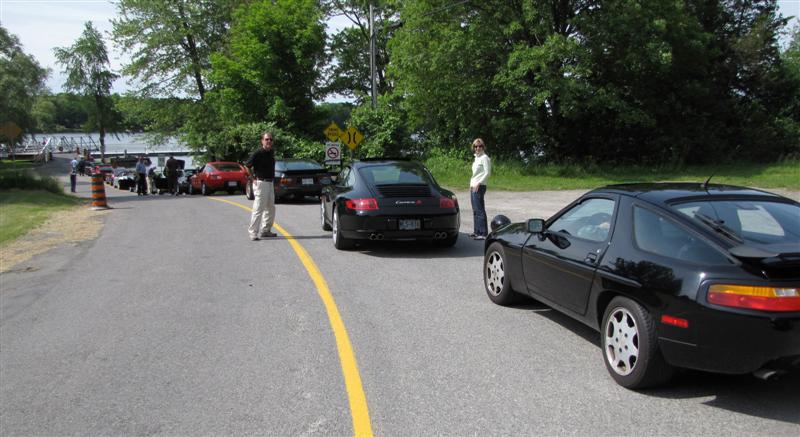 Coffee Run leaders are advised to drive their planned route a few days before the run to ensure that there are no unexpected surprises; and with good reason.

For a variety of reasons I got around to driving the route on Thursday evening. By 7:45 I’d made it about 5 minutes west of Lanark on County Road 12, then disaster struck. The road was completely torn up for widening construction.  I had to improvise in short order and then drive a new route that night. 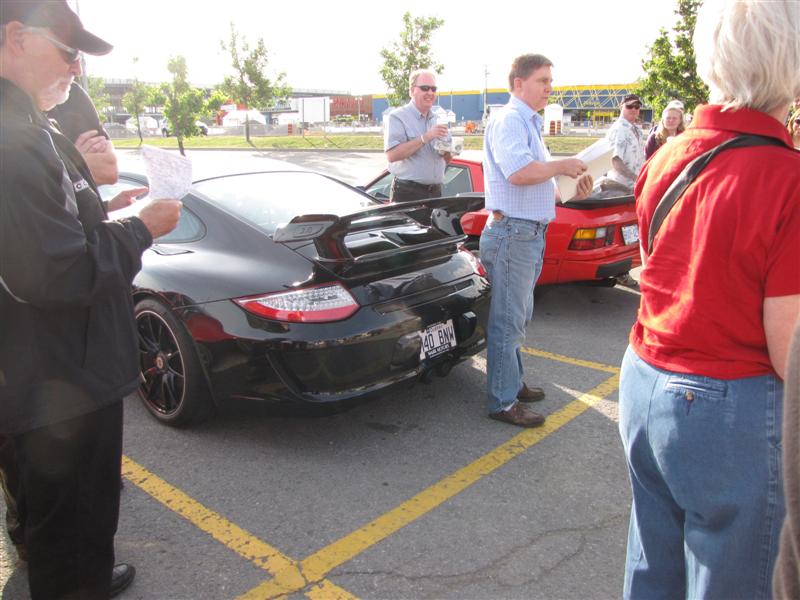 Arriving home at about 12:15 with a new route in mind I laid it out on paper on Friday morning.  With twenty copies of the new route made courtesy of Staples the recovery plan was complete.  Until I got an e-mail from Bruno relaying the fact that the Ottawa Bicycle Club was holding its annual Rally of the Rideau Lakes. Thousands of cyclists would be on many of the same roads on our planned route.  Into react mode again.  I laid out the route again trying where possible to avoid conflicting roads.  An hour later with 20 new copies of the newest route made and a new location for breakfast arranged I was ready, again. 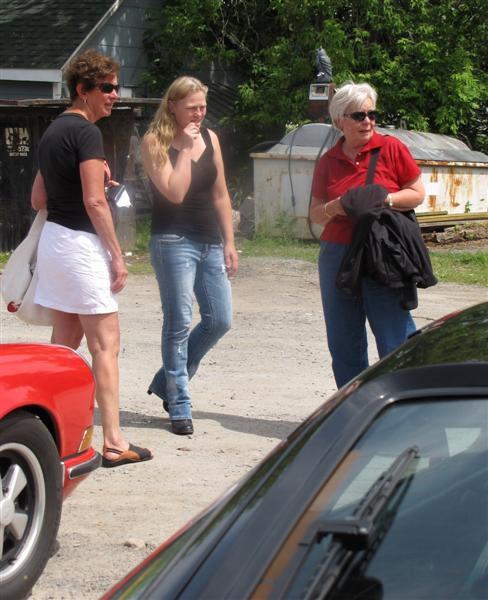 Saturday June 11th was forecast to be rainy in the morning but it started as a perfect day for a Coffee Run with a temperature of 22 degrees C and the previous forecast of rain in the morning moved out until late afternoon.

It was good to see a wide range of Porsches on attendance including a couple of 928’s and a pair of Cayman S’s. We had seventeen cars all together which is a manageable number.  It was an interesting group with some new faces, some regulars and a few old faces that hadn’t been seen in years. Bruno Bastien took the opportunity to hand out several Rennsport/PCA coffee mugs to lucky recipients.  After the drivers meeting we got on the road

Our revised route took us to Smiths Falls where we stopped at Tim Hortons for coffee. We then headed to Toledo for a drive south on County Road #1to Lombardy and on to Perth.  From Perth we headed west on County Road #10 towards Westport and then veered off onto County Road # 14 across The Narrows Locks and the bridge over The Big Rideau Lake where we had a short wait while a cruiser cleared the locks on its way to Westport. 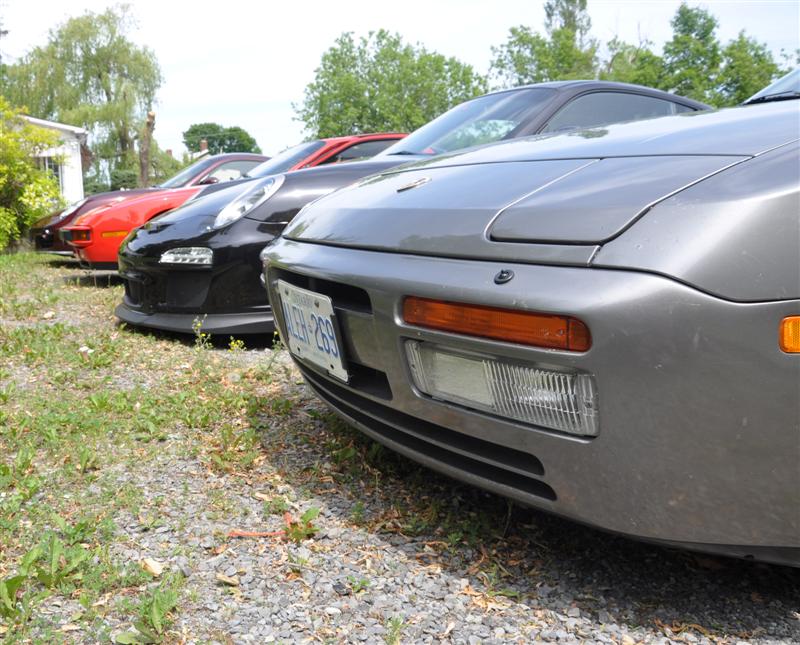 We then proceeded to breakfast at the Stirling Inn in Newboro where a reserved seating section in the sun porch was reserved for us.  With excellent service, a good breakfast and plenty of parking this location will definitely be on “the list” for future Coffee Runs.
After breakfast there was the inevitable tire kicking session as cars were evaluated and discussed.  We ended up a few minutes behind schedule as Bruno Bastien took the opportunity to lock himself in Ed Cordners’ beautiful black on black 1979 911 Turbo.  It took some coaxing to get Bruno to unlock the door and climb out of the drivers’ seat.

After getting Bruno settled back in his 944 we set off northbound through Westport and followed County Road 36 towards Maberly. This was the only point where we encountered masses of cyclists. Extra caution had to be observed as many gaggles of cyclists were taking up the entire southbound lane making it very dicey when southbound cars and trucks were trying to get around them.  On reaching the intersection of Highway 7 at Maberly we headed back to Perth and then on to Ottawa to conclude the run. 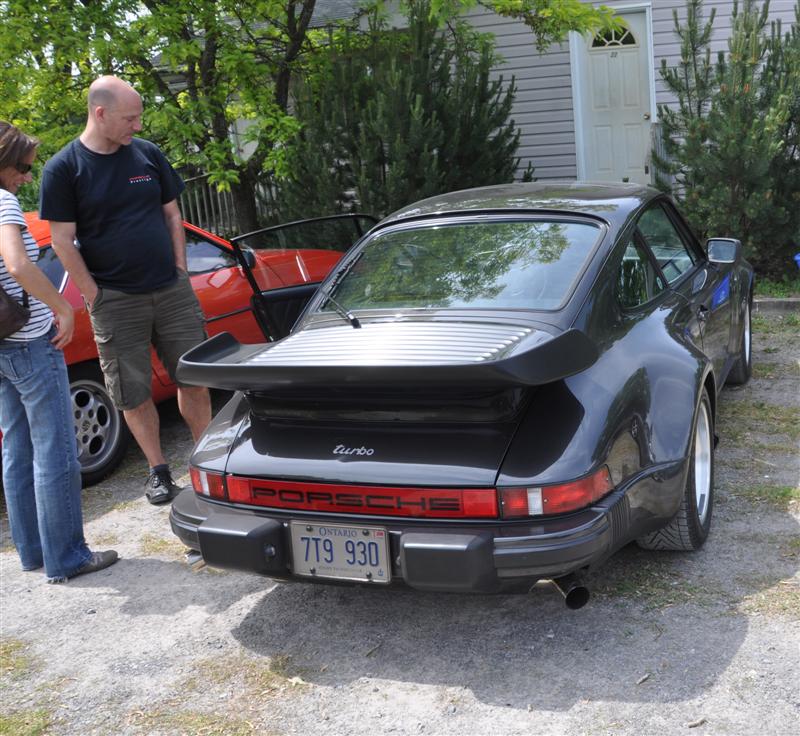 Thanks go out to Norm Reed who volunteered to be the tail end car and did an admirable job of it, as did Louise Lawrence in the mid-pack position.